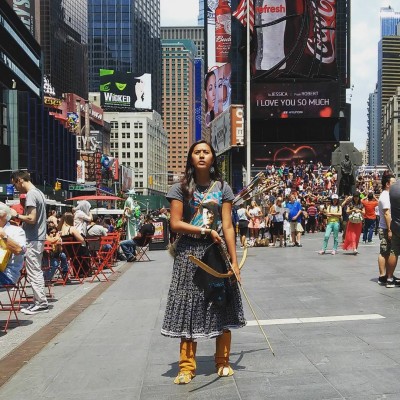 The recent photograph of a young Apache woman in Times Square is, by design, destined to become a lasting symbol of strength, hope, and inspiration for a proud people. As a brazen clash of values, worldviews and cultures pursue Times Square, the United States Capitol, Wounded Knee, and other sacred, historical sites in between, there comes a story of money, power, broken promises and human rights. Resolutely, the young Apache woman moves forward as if compelled by a dream that began hundreds of years ago; her arrow held at ready to pierce the heart and hopefully awaken the soul of a country that has become technologically detached from the land of its better self.

Fast forward from the visions of her elders to modern day, as she and her fellow travelers, with sparse financing, combine phone technology, the Internet, and a deep cultural bond to document their cross-country journey. With a metaphysical mixture of modern social media, songs, true hearts and ancient traditions, they travel in a quest to save a sacred part of the world and, if successful, save it for us all.

On the Southern flank, Wendsler Nosie, the inspiring Apache leader and one of the guest speakers preceding the Moral Monday, March for Voter Rights, spoke at Emmanuel Baptist Church in Winston-Salem, North Carolina: ” We are not alone with injustices and face these challenges together.” You can find out more about the Apache leader’s movement on the Facebook page “Apache Stronghold.” Listen to their words, speeches and songs around nightly campfires as they traverse the country from the beauty of Oak Flat, Arizona Washington D.C. Their journey cuts a much-needed, soul saving path across the grain of a modern American, technology driven society that increasingly consumes more and preserves less.

Arrows of Hope
Their “against all odds” quest to the Capitol is an attempt to save sacred tribal land in the Tonto National Forest, an area protected by President Eisenhower since 1955, from a proposed copper mining operation. How the deal went down to transfer this marvelous natural environment to a British and Australian mining conglomerate, Rio Tinto, should be of concern to all Americans. Oak Flat is one of America’s best desert/riparian forest habitats. J. Scott Wood, an archaeologist who has worked in the Tonto National Forest for 40 years says: “At the end of the day I think the American people are getting short-changed badly. They are going to lose an exquisite, beautiful piece of landscape that belongs to them. And yet a foreign-owned company is going to make billions of dollars of profit off resources that belong to the entire American public…”. 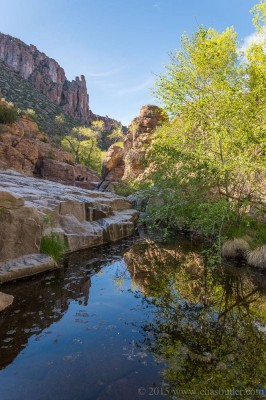 How did this happen? In December of 2014, Arizona Senators John McCain and Jeff Flake deftly added a fine print rider at the last-minute to the must-pass military spending bill, the National Defense Authorization Act. This rider authorizes 2,422 acres of land known as Oak Flat to be transferred in a land trade deal to Resolution Copper, a subsidiary of the giant mining company Rio Tinto. Oak Flat is part of the San Carlos Apache Tribe’s ancestral territory and their most sacred site. The multi-tribal cross-country trip is nothing short of admirable as it exposes the underhanded “late night” political maneuver at our nation’s capital. The cost to American taxpayers and the Earth is too great. The extensive damage to Oak Flat caused by copper mining will be permanent. The loss of scarce water resources for mining – incalculable.